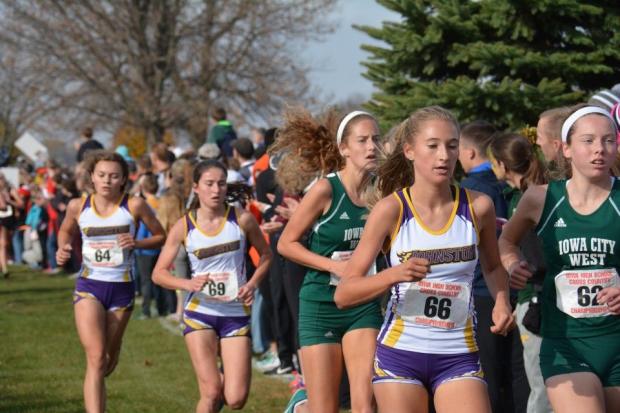 As we enter the start of the cross country season, take a look at who will be returning this year to fight for the individual and team titles in Class 4A.

Individual Championship Race - Girls
Bailey Nock of Iowa City West High School is returning for her senior season. She is the defending Iowa 4A cross country champion and will look to extend her reign this year. She won the race at Fort Dodge last year with a time of 18:06.90, holding off fellow junior Jessica Mckee of Johnston High School by 4 seconds for the win. McKee also returns this year and certainly has her eyes set on that title. A trio of incoming sophomores will also be in the hunt to try to dethrone Baily Nock of the individual title, including Brooklyn Mckee of Johnston High School, Ella Popenhagen of Cedar Rapids Kennedy High School, and Paige Horner of Johnston. The three freshmen placed 3rd, 6th, and 7th individually last year.


Team Champs - Girls
Johnston Girls Cross Country team had a very impressive 2016 season with dominating performances all year long. They ended their season taking the State title with a record-low score of 26 points at Fort Dodge. Their team will have to replace 2017 graduate Emily Poss who finished 5th place at last year's meet. But with 4 freshman returners, they look to be the early favorite to win the team title in back to back years. Cedar Falls High School and Iowa City High School will be two teams that will try to take the team title from Johnston High School.

Continue onto the next page for the boys predictions!