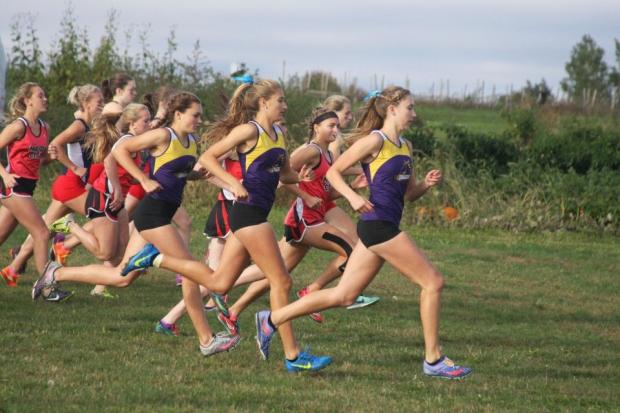 Throughout this cross country season, many wondered if the Johnston girls have what it takes to win the State meet again this year, particularly with two of their top runners, Paige Horner and Josie Hovey out of the lineup. Last year, they finished at the State meet with a record-setting low score of just 26 points. But with the return of Horner at the Fort Dodge Invitational on October 5th, the Dragons have separated themselves from their close competitors this season, Dowling Catholic and Iowa City West. Horner spent the last few months training and competing abroad in the triathlon circuit, improving her overall fitness and strengthening her running abilities. Horner finished just two seconds behind Dragon frontrunner Jessica McKee in Fort Dodge with a time of 18:19, improving on her XC PR of 18:31 from last year. Less than a week later, Horner once again finished just behind McKee at the CIML Conference Championships. At this past week's District Qualifying meet, Brooke McKee competed well by out-kicking Horner by five seconds, proving that Johnston is once again strong up front. Though the Dragons lost another of their top seven, Kendall Knead due to chronic injury, they have solidified their lead in the rankings to take the team win.

Here is the breakdown in rankings for the top 3 girls teams this weekend....

WIth the return of Horner, the real competition will be for 2nd place between Iowa City West and Dowling Catholic!

Want to see how all of the teams will match up this weekend? Check out our Virtual Meets feature!