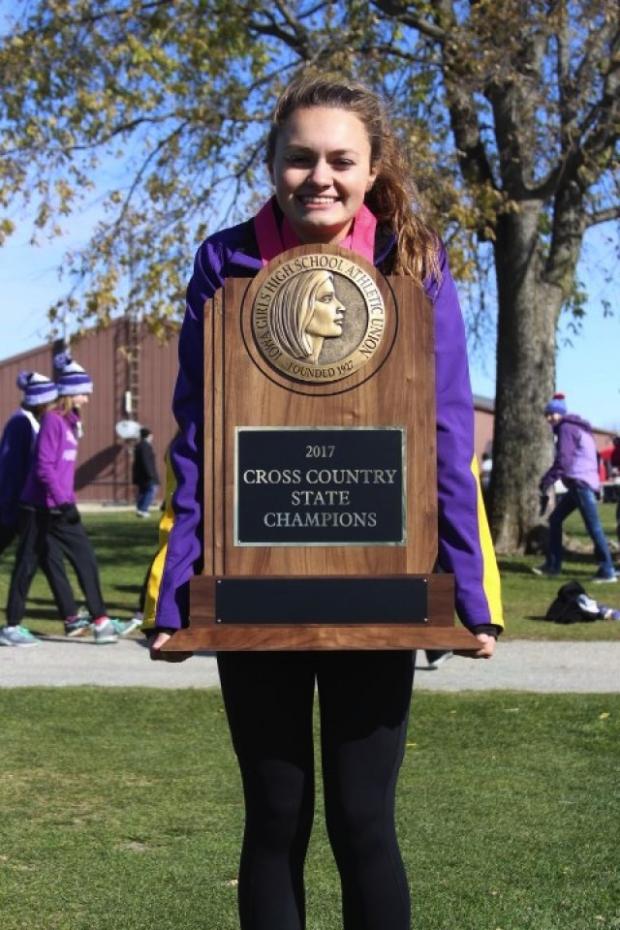 Johnston's Paige Horner dropped jaws at the Iowa State Cross Country Championships on October 28th when the sophomore, who has never won a varsity cross country race prior, took the lead around the 1K mark and forcefully pulled away from the field to take the win. "Going into the state meet I wanted to place top 3. I was hoping for a strong start and finish, and to remain consistent through out the rest of the race," Horner said. The win came as a huge surprise to Iowa XC fans, as the sophomore had been gone for most of the season coming back in time for one regular season meet before the championship season began.

Horner first made a name for herself in the cross country world last year when she was one of Johnston's top 5, being a scorer on one of the best teams in Iowa running history. She finished 4th on their team last year and 7th overall with a time of 18:54. But that was not the start of Horner's impressive athletic career. She has been competing as a high caliber triathlete for quite some time, rounding out her repertoire with a 34th place finish as the ITU World Triathlon Junior Women's competition in September, the second-highest American finisher at the competition in Rotterdam, The Netherlands. "It was an amazing experience racing with people from all around the world. It was a dream of mine to make it to junior worlds at the beginning of the season and getting the opportunity was a dream come true."

While fellow Dragon sisters Jessica and Brooke McKee have consistently been ranked ahead of Horner, the real surprise was when she dropped defending State Champ Bailey Nock of Iowa City West. Nock had the early lead by a good 5-10 yards, but around 4:00 into the race, Horner fully committed and took a charge of the field, never looking back. "I knew about the competition going into the race and I knew that Bailey Nock has a great kick at the end. So I just tried to stick with my pace and create a gap."

She ended up winning the 4A race with an impressive time of 18:04, followed by Nock in 18:19, J. McKee in 18:31, B. McKee in 18:44, and Kylie Latham in 18:48 to round out the top 5. Horner's finish puts her in the top 5 fastest times in the course's Iowa State XC Championship history. The Dragons have fostered an environment of excellence that is paired with strong bonds, "My teammates are like family to me. Racing with them is a lot of fun because we are close in time and can push each other. My teammates were very supportive and I would like to thank them for pushing me."

With 3 athletes in the top 5, it was very clear to spectators that the Johnston girls would once again win the 4A title by a large margin after their record-setting first-place finish in 26 points last year. They finished with a score of 74 points, with their fourth and fifth runners finishing in 38th and 40th, respectively. They were 44 points ahead of the next team, Dubuque Senior, who finished with a total of 118 points. Johnston will return 4 of their top 5 next year with the loss of Jessica McKee, including Horner and Brooke who are sophomores, junior Lindsey Batkiewicz, freshman Bella Heikes, plus their 6th runner sophomore Clara Toot who finished in 71st place. This year's win marks 3 wins out of the last 4 years for the Dragons. There is no doubt that with the return of so many young, strong runners, plus the hopeful return of Josie Hovey, that the Dragons could once again compete for the top spot next year.