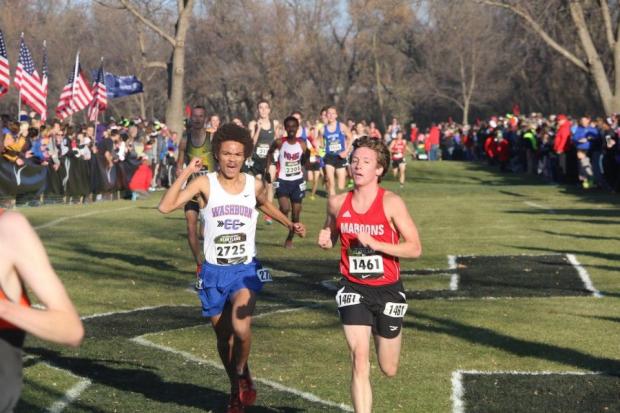 The Dowling Catholic boys cross country team (Maroons XC Club) was the top Iowa team at Nike Heartland Regional in Sioux Falls South Dakota, finishing 3rd overall behind Wayzata XC Club and Middleton XC in the Boys Championship race. Matthew Carmody was the top finisher for the state of Iowa and for the Maroons in 14th place with a time of 15:21 over the 5K course. Their team average was 15:44 and all 5 scores were under 16:02. The Defending state champs in Iowa, Pleasant Valley, finished 5th overall as the second Iowan team. They were led by Anthony Pena with a time of 15:32 and Konnor Sommer at 15:34. Another Individual who had a great day was Merga Gemeda who clocked an excellent time of 15:25 and placed 17th overall. Other teams that competed in the Nike Heartland Regional Championship race include the Johnston Dragons who were 19th place, Dubuque Hempstead who finished 25th, and Valley (WDM Valley Running Orange) who finished 26th.

On the women side, the Johnston Dragons continue to prove that they are the best women's team in the state of Iowa. They finished 8th overall with Minnesota powerhouses Wayzata and Edina finishing 1 and 2. Iowa Individual state champion Paige Horner finished 14th overall with a new PR of 17:52, the sophomore's first time to dip under the 18:00 mark. Bailey Nock was the second finisher from the state of Iowa just behind Horner in 15th place with a time of 17:53. The Mckee sisters also had a very strong day for the Dragons with Jessica Mckee running 17:58 in 21st and Brooke Mckee clocking 18:15 for 35th place. Other Iowa teams that competed include Dowling Catholic (Maroons XC Club) in 20th place and Ankeny Centennial (Dashing Jags) were 26th place.

Check out the full results, including results of the open races, photos, videos , and more at our Results Hub!

Plus scroll down for pre-race interviews with Johnston coach Pat Hennes and Paige Horner!