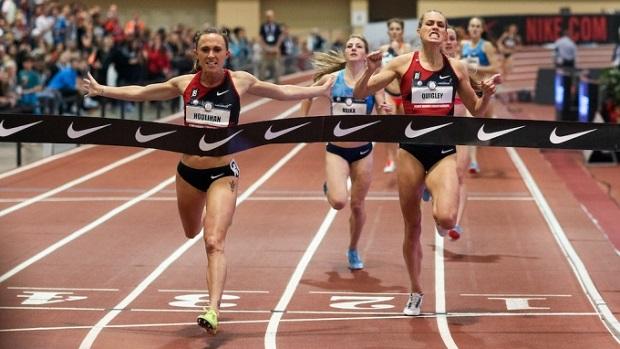 Iowa native Shelby Houlihan has once again impressed the running world with her incredible versatility. After winning both the 3000 and 1500 at last year's USATF Indoor Championships, it was anybody's guess as to whether she would come back this year and defend both titles, competing in the deathly double once again. She not only won both races, but closed the last lap of her 3000 meter race in an insane 28-second 200 at 5,000 ft altitude. For the sprinters, the increase in altitude is a welcomed improvement, reducing on air friction and resistance. Many sprinters are able to achieve big PR's while competing at altitude. When it comes to distance athletes, the story is quite the opposite. The increase in altitude means a lack of oxygen getting to the muscles, equaling quicker onset of fatigue and a longer amount of time necessary for recovery. This fact makes Houlihan's performance even more impressive knowing that she closed the 3000 that fast on Saturday and still came back to win the 1500 with tired legs the next day. She ran 9:00.08 in the 3000 and 4:13.07 in the 1500, just edging out teammate Colleen Quigley for the win.

Houlihan will join Quigley and the other qualifiers for the IAAF World Indoor Championships in Birmingham March 1-4.

You can watch a great interview with Shelby after her 3000 win by Flotrack here!