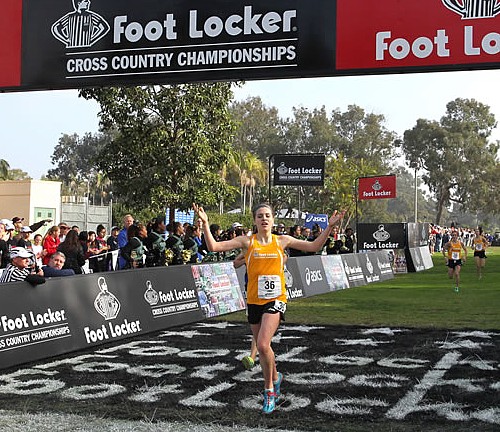 When Waverly-Shell Rock’s Anna Holdiman finished sixth (among athletes from 13 midwest states) in the Footlocker Midwest Regional Championships, Kenosha, WI on November 24 and qualified for Footlocker Nationals, it surprised the regional experts.  Then none of the so-called “national” experts gave Anna a chance against the best forty USA high school XC runners at Nationals.  (Click here for a National preview article.)

Even a much bigger SURPRISE this time.  Treated like kings and queens (e.g., staying at the world-famous Hotel Del Coronado, socializing with former Olympians) days before, during, and after the Footlocker National Championships, San Diego, CA on December 8, just being there and enjoying the festivities would have been enough for most high school athletes.  Just being there wasn’t good enough for Anna.  In the final competition last Saturday (12/8), she challenged the nation’s best throughout the race and finished an astonishing seventh (5k – 17:42.4), which also made her a scorer on the victorious Midwest squad that won it’s fifth straight Footlocker National team championship (Midwest - 24, South – 49, Northeast – 71, West – 98).  Click here for the results/photos/videos; here for a summary article; and here for the Footlocker National website with complete coverage.  Click here for a Footlocker interview with Anna after the race.