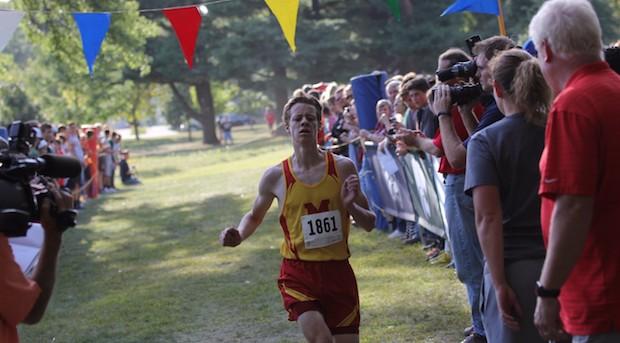 CEDAR RAPIDS, Iowa - For three years, the Cedar Rapids Invitational had beaten Jeremy Fompa. On Thursday here at Noelridge Park, the Marion senior was determined to turn the tables.

"It was good to get a win, kind of leave this spot with a good memory instead of a disappointing one," he said. "It was really important to me. I wanted this. This is kind of like all of Cedar Rapids. Everybody comes here."

The only disappointment of the day for Fopma came when he realized Iowa City West would not be running its varsity. That meant another of the state's top runners, Colby Greiner wouldn't be there.

"That was kind of something I wanted," Fopma said. "I definitely wanted that competition. If I was there, I think he would go faster and I'd run faster. It didn't happen."

Greiner's absence (he ran in Marshalltown) also caught Turnbough off-guard. He expected to run against another top runner from Iowa City.

"I was surprised not to see him," Turnbough said. "But sometimes you don't see some of the teams' varsities here. Not seeing Kolby, there was a little extra competition I could have used out there, that I would have wanted to see. But I'm not exactly disappointed he wasn't here."

Greiner's absence made it easier for Turnbough to grab second place behind Fopma. It represented another step forward for the sophomore.

"Before the race I was just telling myself that it's going to be a lot tougher, just relax," he said. "It was a different mind set."

Dolezal, also just a sophomore, is running cross country for the first time.

He finished third at the Cedar Rapids Prairie Invitational last month. He pleased with his progress.

Check out a post-race interview with Jeremy Fopma below!