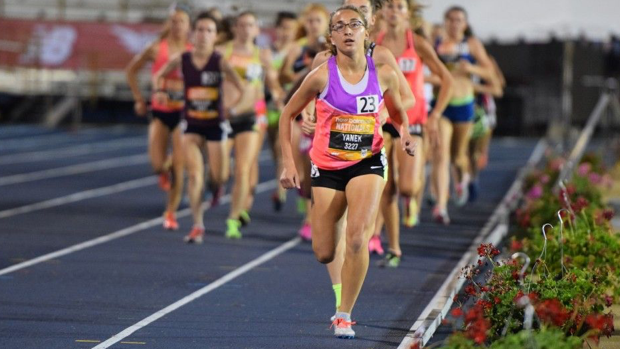 After winning the 4A State Title in 2013, McKenzie Yanek looked poised to defend her title in 2014. After an undefeated season she entered the state meet better than ever. Trouble struck her Pleasant Valley team as they all became sick causing them to withdraw from the State Meet. Yanek, now in her senior year, is ready to regain her top spot.

First off, how has summer training gone? Are you ready for the season to start?

This is the best off season training I've had. I ran more miles and cross trained less and stayed healthy the entire summer! We didn't do much speedwork, we did tempo, hills, and a long run each week. I'm very excited for this season to start, our team looks great! We had about 40 girls who came to run each morning and we're expecting 70 people to be on our team this year. Our coaches do an awesome job of making people enjoy running and we can't wait to get started this season.

At the end of the season you competed at New Balance Nationals, what do you think you learned form that experience?

Don't be intimidated by anyone! I was nervous when I first got there because everyone seemed stronger or leaner than me and I read about some of the people on milesplit or flotrack; so they seem like running celebrities to me! But it helped me realize just be confident in yourself, you've put in the training so you can compete with anyone. I normally rely on my teammates before racing, they always keep me calmer. This time I had to do that myself and now I know I can stay relaxed on my own and still race well.

Obviously last fall ended far from how you envisioned, how did that affect you moving forward?

It made me realize running is a lifestyle but it's not your life. We still went to school that following Monday, not sure how because that was the most exhausting weekend we've ever endured, but we still had friends to talk to, homework to do, it really put things into perspective. Not getting to compete at state makes you realize racing is just fun and it's an opportunity to show all the hard work you put in.

What are your goals for the season?

I have a couple, for our team to win our 11th straight MAC title and win state. I'd like to win state and set a record that lasts for awhile, I'm hoping to run under 17:15 this year in the 5k. Make it to Nike and Footlocker Nationals and place in the top 10 at both.

You have 3 successful years complete now, what have you learned during that time?

You will inevitably have ups and downs and your attitude impacts the team so if you're going through a down period still have a good attitude. And you're success is always a team effort, your teammates, coaches, family, community, physical therapists, chiropractors.... the list is ridiculously long of people who help you along the way so thank them!

How did you first start running?

Our neighbor holds Pleasant Valley's 100m record and he was in the newspaper all the time, so I wanted to be like him. His dad made him get out of the car and run up the hill we lived on and I decided to do the same. We also played kickball, capture the flag, games like that all day, it was exhausting but running around was my favorite thing to do. I think playing those games gave me a good aerobic base!

What have your favorite memories been during your running career?

My freshmen year at state cross country! We were a such a tight knit team, not just our top 7 but all 90 girls. Everyone was so supportive and we were all working towards the same goal, it was like being a part of the dream team! Also when our team won the state track title this past season. I've never cried after a meet but how can you not when you see your coaches crying? That win just meant so much to us, our shuttle hurdle, sprint med, every relay and individual was just amazing! I've never seen my teammates look so intense or want something so badly.

What meets will you be focusing on this season? Outside of the state meet of course

Nike and Footlocker regionals, hopefully there will be no surprise illnesses this time!