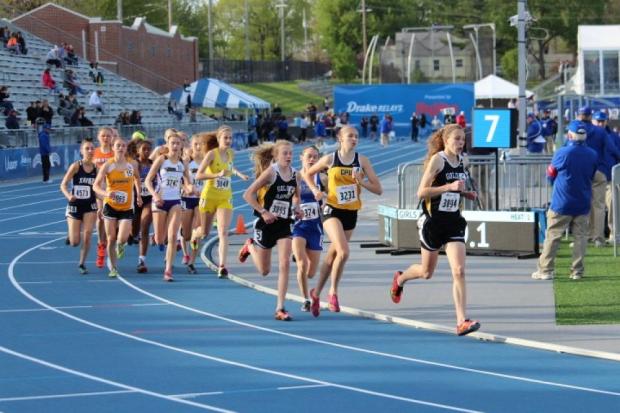 For many years, states across the country had separate associations for girls and boys athletics, beginning with the enactment of Title IX in 1972. Because of Title IX, schools could no longer deny a female the right to participate in athletics simply based on her sex. Schools began providing sports teams and intramural leagues for females and in doing so created more "sensitive" options, like shorter race distances.

For hundreds of years, people believed that if a female were to run vigorously, she would risk her childbearing abilities and could potentially harm her reproductive organs. Katherine Switzer was the first female to compete in the Boston Marathon in 1967, years before Title IX said she was legally allowed to. In competing, she was attacked and berated -- but that didn't stop her. She completed the race in 4 hours and 20 minutes, coming back this past year to compete once again at the age of 70, clearly showing that women are just as capable of competing in distance running as males.

Because of the way Title IX was introduced and athletics were created, most states had already formed a male athletics association and therefore decide to create a separate one to govern female athletics, but throughout the last couple of decades, those separate associations have come together to form one governing body over all high school athletics for that state. In doing so, most states adjusted their races to ensure that boys and girls were competing in the same events.

So why is it that Iowa is the only state left to still have separate associations and events when it comes to athletics? High school athletics in Iowa are governed by the Iowa High School Athletic Association (IAHSAA) and the Iowa Girls High School Athletic Union (IGHSAU), which separate male and female athletics. Not only are the associations divided, but the event distances are also subject to difference. In cross country, the males and females run the same distance -- 5 kilometers -- which was just changed a few years ago. Female upperclassmen began their high school cross country careers running a distance of 4K, while the males ran 5Ks.

I grew up in Missouri and entered high school over a decade ago. We raced the same 5K distance as the boys and I never knew anything different -- nor would I have wanted to. Kansas was one of the few who raced 4Ks at that time, but switched to 5Ks during my high school days and I remember thinking, "Wow, I didn't even know that was a thing."

Low and behold, moving to Iowa was a huge eye-opener for me. Iowa is behind the times, and it's hurting not only the recruiting in this state but also the representation of Iowa on a national stage. While running a 1500m and 3000m does help prepare female athletes for those distances in college -- since the 3000m is run during the indoor season and the 1500m is run in the outdoor season -- it does not help college coaches recruit athletes from Iowa. When most of the country is racing 3200m and 1600m, it makes it more difficult to compare athletes.

Coaches essentially have to do some math to guess what time that athlete might have run had the distance been longer, which certainly does indicate the overall fitness of an athlete. But it cannot pinpoint exactly how that athlete would have finished, making it a less accurate way to compare athletes. Coaches are going to be more likely to round up to a slower time than to round down to a faster time to be safe, which can then cause that athlete to lose out on recruitment if it is between them and someone from another state who has run the actual distance.

I think it is time for Iowa to get with the times and form one governing body and give females the same race distances as males, whether that's moving the boys to 1500m and 3000m, or moving the girls to 1600m and 3200m. If Iowa wants to be taken seriously in out-of-state recruiting in athletics, this is the first step that needs to be taken. While many athletes have been able to break through these barriers and participate in high-caliber events, both on the high school national stage -- such as the Assumption girls competing, and winning, at New Balance Nationals Indoor -- and in collegiate athletics -- how about former Dowling Catholic alum Karissa Schweizer winning NCAAs for the University of Missouri -- I believe these changes could help encourage it even more and make Iowa a top recruiting state.

We continue to see improvements in overall times coming out of Iowa, so why not continue to improve the way athletics are handled?