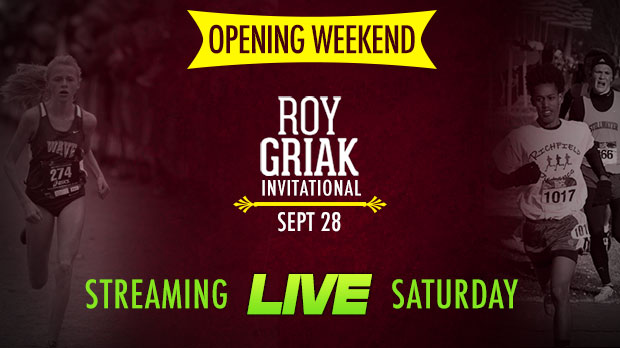 MileSplit and Flotrack have partnered to broadcast the 28th Roy Griak Invitational, hosted by the University of Minnesota. The Roy Griak Invitational is one of the most competitive early season cross country competitions nationwide. The meet will be live streamed via eight cameras on Flotrack.org for all Flotrack Pro subscribers.

The Roy Griak Invitational will be home to numerous match-ups among some the nation's top collegian teams and athletes. The Men’s Gold Race will feature three ranked division one schools, lead by #4 Brigham Young University. BYU’s biggest challenge will perhaps be from the division two powerhouse, #1 Adams State University. On the women’s side, #5 Arizona leads five ranked division one teams who will make the trip to Minneapolis, MN.

The high school races will also feature strong interstate battles on the boy’s and girl's side. ObsaAli (Richfield) is the pre-race favorite in the boy’s individual race, but will have to fend off challenges from Addison DeHaven (Brookings), Stephen Mugeche (Blue Springs), Joe Klecker (Hopkins),Keeghan Hurley (Perham), and others. Behind the front pack, the race for the team title will be up for grabs as Minnesota’s #1 Wayzata HS will have to deal with out-of-state teams from Colorado (Cherry Creek), Iowa (Dowling Catholic and Cedar Falls), Missouri (Blue Springs andReymore-Peculiar), North Dakota (Bismarck), South Dakota (Brookings and Sioux Falls), Texas (Cedar Park), Wisconsin (Port Washington).

The girl’s race will follow a similar storyline. US#11 Jordyn Colter (Cherry Creek) leads the way for the individual title, but 2012 Foot Locker Finalist Megan Reilly (Warwick Valley) will not make it easy. Both Jenna Truedson (Bemidji), and McKenzie Yanek (Pleasant Valley) have had fantastic years and should not be discounted either. The girl’s team race will be a clash of the titans between Minnesota’s US#8 Wayzata and Illinois' US#5 Naperville North.

The 28th Annual Roy Griak Invitational will be available live for all Flotrack Pro subscribers. Not a member? Sign up for Flotrack Pro here.