Jessica Heims isn't your average high school senior... while she can list involvement in sports, band, and being Homecoming Queen on her résumé, Heims can also list Track and Field Olympian on her impressive list of accomplishments. The fearless teenager has let nothing stand in the way of pursuing her dreams, including the amputation of her right lower leg and foot in her first year of life. After dedicating countless hours to training, Heims competed at the U.S. Trials in Charlotte, N.C. to earn a spot on Team USA for the 2016 Paralympic Games in Rio De Janiero. Less than two weeks before the Games were set to begin, Heims was informed that she would compete in the 400m and the discus in Rio. As just one of two high school students representing the United States at the Games, Heims is certainly a source of inspiration for many athletes across Iowa and the United States. Read below to learn more about Jessica and her experience at the Paralympics! 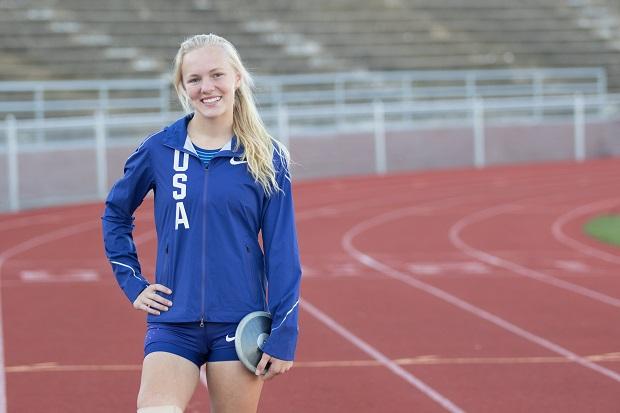 When did you begin running and throwing?
I started running when I was 10 years old. My older sister had just started middle school cross country, and seeing as my younger sister and I liked to do everything she did, we started running too. I first threw the discus at a youth track meet. My parents signed my up for just about every field event so I could try them all out for fun. I wasn't a fan of most of the other field events except for discus, so I stuck with it.

Who has inspired you?
My sisters are the two people who have inspired me the most. My older sister Beth was the first one in my family to run, and the fact that she willingly went to practice every day and enjoyed the meets and competition had an impact on me. I wanted to grow up to be like her, so knowing that she could find joy and excitement in running and competition made me realize that I could too. My younger sister has helped inspire me to love the sport. She does not enjoy competition very much, but is happy to go out on a run all by herself. So many people get caught up in only loving the sport for the glory of winning, and I find it refreshing to see someone love the sport just for being able to do the sport itself. 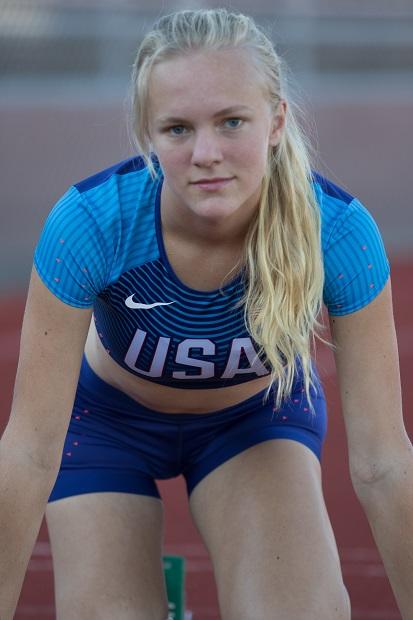 What else has been your inspiration?
My stubbornness in a way has been some sort of my inspiration. I don't like to be told not to do something (typical teenagers, I know), so when someone challenges me or doubts me, I tend to push myself that much harder. My family and friends have also been a large inspiration form me. They have been nothing but excited and supportive for me. I grew up running with my friends in local track clubs and at local 5ks, and having them cheer me on and include me in the sport [has] helped me grow as an athlete.
What has been your biggest challenge?
My biggest challenge has probably been commitment. It is easy to make a goal and set a plan, but it is difficult to actually carry out that plan. Training takes up a lot of time, and once school starts I become booked with activities. It is very difficult to find time to practice. I have to train for two different sports, and I do cross training of strength, swimming, and biking along with running and throwing. I typically train between 3-5 days a week on the off season and 4-6 days a week when I am in season. There are times that I definitely wish that I wouldn't have to train so that I have more time to do homework or be with friends, or even have a job. Whenever I have doubts about my commitment to the sport, I have to think about the big picture, and why I am doing it all.
When did you start to think Rio was a possibility for you?
Rio was first brought up to me when I was around 12 years old. People would say it at track meets, mostly as a little joke because it was so far away. It wasn't until last year after I went to World Championships that I actually allowed myself to plan for it or to set it as a goal as opposed to a dream. But honestly, it was always difficult to think of it as a possibility, even when I was at [the] trials. I grew up watching the Olympics on TV, but making that switch from spectator to participant is something that is difficult to really settle in.
What was it like competing in the Paralympics as a high schooler? 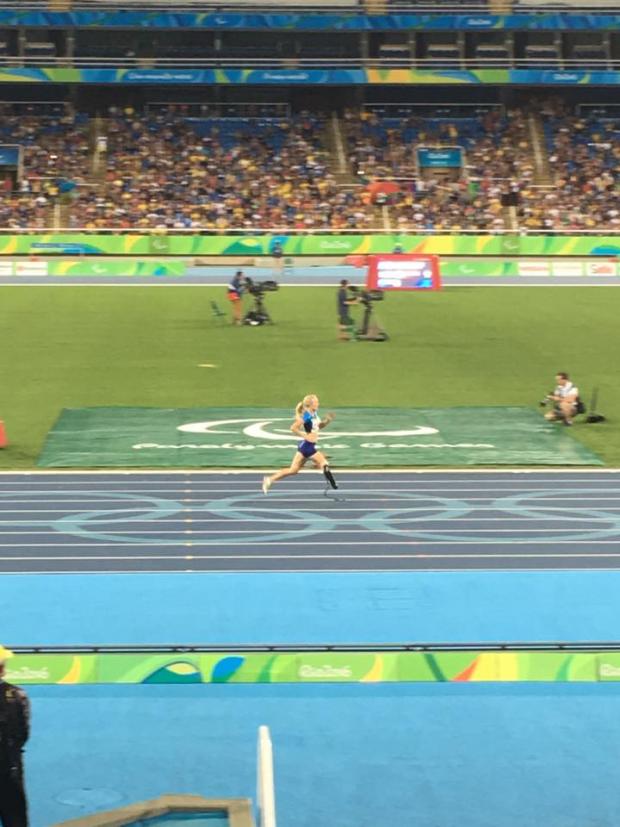 It was a little bit crazy. And by "a little" I mean a lot. I've become used to competing against adults, yet it seems surreal every time I think about it. Many of my competitors train and compete professionally, and do not have studies and schooling going along with it. The small group of us that were still in high school or college would do homework or study on the bus rides to and from the track. People were/are always surprised to hear that I'm still in high school, and reasonably so. I never thought I'd be wearing an Olympic jersey before I received my high school diploma.
How did the Paralympics go for you? Were you happy with how you performed?
I was very happy with how I did. I got a PR in both of my events, which was absolutely amazing. I wasn't notified of my spot on the team until a week and a half before I left, so the entire experience of training and preparation was a bit of a whirlwind. But overall I am very proud of how I did. I made sure to tell myself that before I competed. I didn't want my performance to impact my self-worth or pride.
What was the hardest part about Rio? 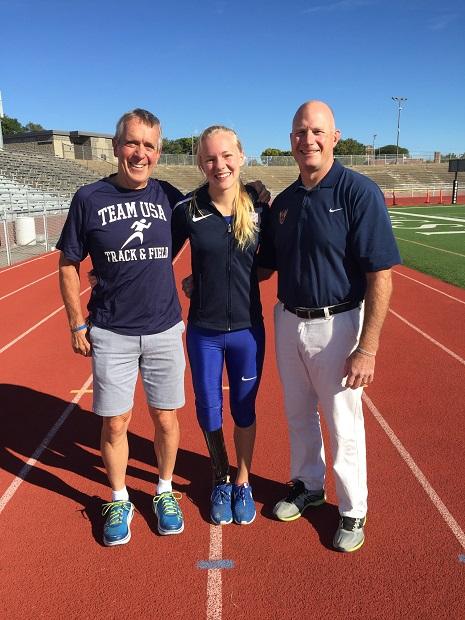 Not being with my coaches was definitely the hardest part. I have immense respect for my coaches and work much better when I am with them. Neither of them were able to make it to Rio, so we would text or call back and forth to discuss training and adjust my schedule. I mostly missed them during the competition. My discus coach is phenomenal and always knows what I need to do. I can often tell and just myself, but there is a sense of security that comes with having your coach there, and just knowing that they're with you. But both of my coaches watched by events live streamed, so it did make me feel better knowing that they were watching. Going into competition, I was most worried about the atmosphere of everything. I [had] been told that the call tent/call room was very uptight and intimidating, especially for the throwing events. I don't deal with pressure extremely well (a bit ironic for someone going to the Olympics), but it ended up not being an issue at all.
How have your friends, teammates, and family responded to your success?
Everyone has been absolutely incredible. I have been warned that some people may not respond very well, but I have received nothing but love from everyone. The entire community here in Cedar Rapids has been extremely supportive, which has been much a surprise for me. Some students at Coe College made t-shirts in support of Rio and I have seen so many people around school and around town wearing them, even people I don't know. It's truly been a blessing to know and to be around so many people who are so excited for me and this opportunity I have been given.
What did your school do when you made/competed in the Paralympics?
I can't even begin with the support I received from my school. Everyone was so excited for me, and the staff has been so kind to me. It's a bit stressful missing two weeks of school senior year, especially with the difficult classes I am taking, but all of the teachers have been very accommodating and willing to take time out of their day to help me get back on track.
You were just recently crowned as Homecoming Queen at your school, what was that like? 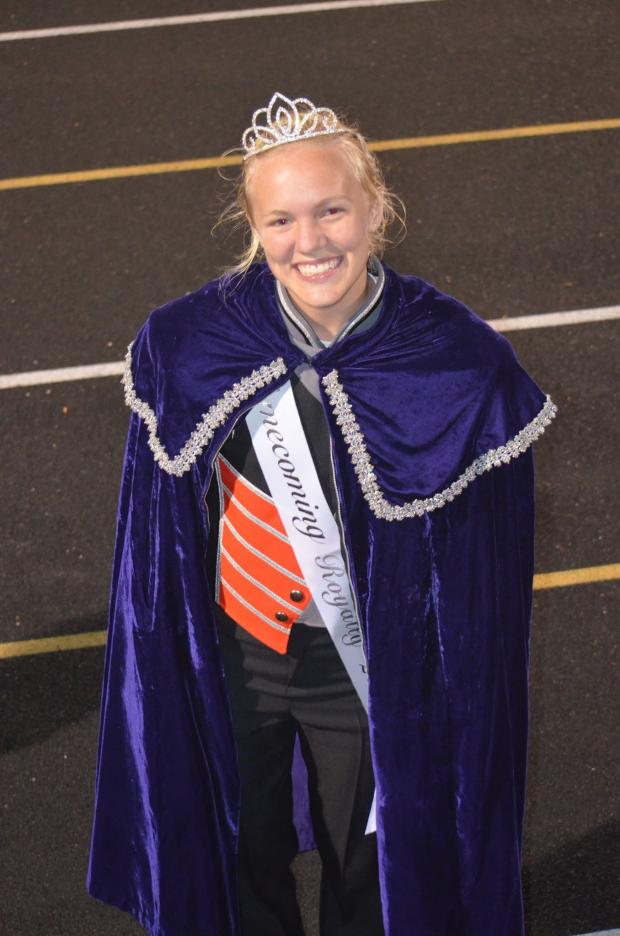 That was very exciting. I honestly didn't think I would be on court at all because I never considered myself to be a stereotypical homecoming-queen, but it was all very exciting to be a part of. I came back to school the week of homecoming, so it helped ease me back down from the whirlwind weeks I'd had. And my good friend Sam Grant was crowned king, so that made the experience all the more exciting.
Do you think you will try to pursue Tokyo in 2020?
I can definitely see myself pursuing Tokyo. I would love to continue competition into the future.
What other goals/ambitions do you have for yourself in the next few years?
I plan on going to college at the University of Northern Iowa and focusing on my studies for biology there. I will be training with the track team there, so I will be working on time management. 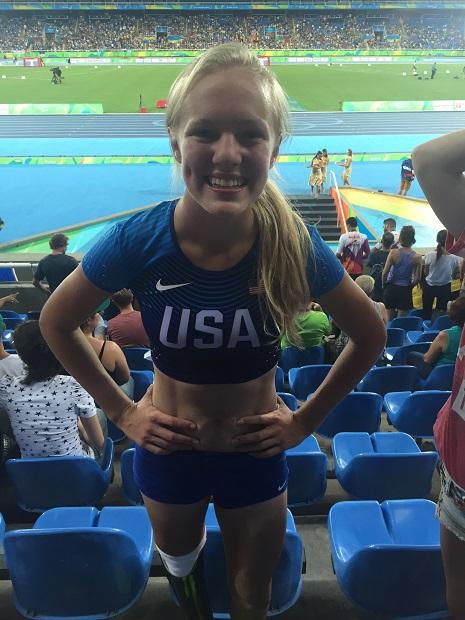 What advice do you have for other athletes who want to follow their dreams?
I always advise people to make sure that they are always doing what they love. I have seen people only be in a sport because they are pressured to, and I have always made it a goal to never fall into that trap. Sports are difficult, but they become even more so when you don't have a reason to continue through it. When you compete in what you love, you can't lose sight of what's really important. No matter how far you go or how big you make it, you are never to good to go back to your humble beginnings. You need to always compete for the little girl or boy inside of you that fell in love with the sport before competitions and medal became important.

You can watch Jessica compete in the 400m race at the Paralympic Games below!