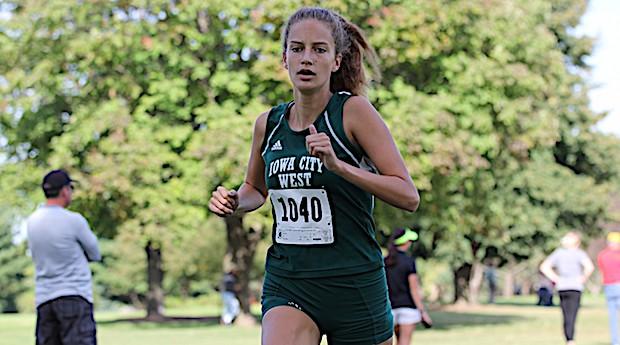 CEDAR RAPIDS, Iowa - A good student, Bailey Nock does her homework, not only in the classroom but also on the race course.

It happened here Thursday at the Cedar Rapids Invitational. Nock watched Poellet lead for the first mile. The veteran state champion fended off the urge to go with the youngster. She settled into her pace.

It worked like a charm. Nock passed Poellet during the second mile. She broke the course record with an 18:18. Poellet (18:31) hung on for second. Bettendorf's Trinity Borland (18:56) took third.

Nock, the defending Class 4A state champion, said pacing herself has been a learned skill. In the past, she may have chased Poellet too early.

"It's taken me a really long time to learn, actually," Nock said. "When I was a freshman, if I were to see that, I may have lost a lot of confidence in myself. I might have gone through the motions with it. This year, I knew I had to stay completely in the race and stay focused. I've learned to stay focused on my race."

Despite the success, Nock said she's a work in progress. She's trying to piece together different parts of her race to improve the whole.

"I'd say this is the most improvement I've had early in a season. I've seen that the last couple of weeks. I'd say I'm headed in the right direction," she said.

Poellet felt good about her strategy Thursday even though she couldn't hang on for the win. She wanted to pressure Nock and hopefully get her off her race.

"I knew she was the defending state champ, so I knew it would be a difficult race. When she passed me, I knew she was good and I tried to keep up with here but she was just able to keep pulling ahead," Poellet said.

Still, it's been a good start to Poellet's first season. She's improved, calmed down and shown herself she belongs.

"We've done some interval training and I've worked on getting my speed up a little. I've gotten better. My PR has been better," she said.

Check out an interview with Bailey after the win below!

For other race video and video interviews, including Micah Poellet, please click HERE.