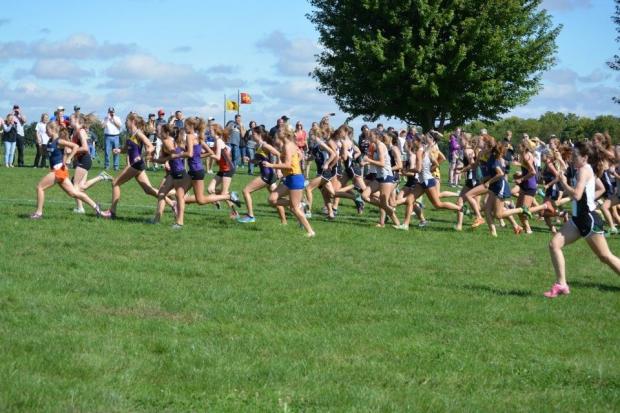 AMES, IOWA- The Heartland Classic presented another competitive field this year, with some of the states strongest athletes finally competing in the same race. Many were curious to see how the Johnston girls team would fare against other Iowan teams going head to head, including in the front with Jessica McKee and defending state champ Bailey Nock finally racing each other, along with freshman phenom Micah Poellet. This is also the first time we have been able to see the Dragons compete against the Dowling Catholic Maroons, a team that has slowly been inching their way towards the Johnston girls this season. However, the Dragons held strong and took the team title at the historic meet hosted by Des Moines Roosevelt. Led by sister duo Jessica and Brooke McKee, finishing 4th (19:24) and 8th (19:39) respectively, the Dragons collected a team score of 108 points. The team still did not contain 2016 All-Staters Paige Horner and Josie Hovey, leaving many wondering if they will return at all this season. Dowling Catholic and Iowa City West continue their pursuit on the defending state champs. The Dowling Maroons claimed a 2nd place finish, just 11 points behind Johnston with a team score of 119. Iowa City West was led by senior Bailey Nock who won the meet with a time of 18:51, the only athlete to break the 19-minute mark on the Iowa State cross country course today. Nock has remained undefeated so far this season, gradually lengthening her gap to the others and presenting herself as the strong favorite for the individual title again this year. The Trojans finished with a team score of 123, just 4 points behind the Dowling team. Should Paige Horner and Josie Hovey return to the Johnston team, the gap between the Dragons and these two teams could change significantly, but under the current team lineups, the Maroons and Trojans certainly have an opportunity to close the gap to the Dragons and fight for the State title next month. Linn-Mar freshman Micah Poellet certainly did not disappoint with a third place finish in 19:15, the second overall finisher for the state of Iowa. With some significant time gaps between Nock, Poellet, and McKee, we may be getting a glimpse into the final lineup at State this year, though all cross country fans know that anything can happen during the race in Fort Dodge, and any one of these strong athletes could take the title next month.

On the boys side, the Iowa teams struggled to compete with their out-of-state competitors, with Dowling Catholic finishing 4th overall as the top Iowa team with a score of 178. Matthew Carmody led the Maroons with a strong first place finish, crossing the line in 15:42, with a 9-second margin from the 2nd place finisher. He was followed by a handful of out of state athletes, with Jeremy Fopma as the second Iowan in 5th place with a 16:05, followed by Centennial's Camden Cox just one-second behind. These three seniors are all certainly eyeing the State title this year, along with Iowa City West junior Kolby Greiner who placed 9th overall in 16:15, and have all been strong competitors up front this season. The next overall Iowan team behind Dowling was Cedar Rapids Prairie, who finished 7th overall with a team score of 237. Their team split amongst the top 5 was only 32 seconds, showing some great depth and a strong pack going into the second half of the season. The Johnston boys were right behind with an 8th place finish and a team score of 272. Led by Carmody up front, the Maroons have a asserted themselves as the clear favorite for this year's State Championships, potentially adding another team title to their impressive school athletic repertoire, should all athletes remain healthy.

Stay tuned for more coverage from the Heartland Classic!