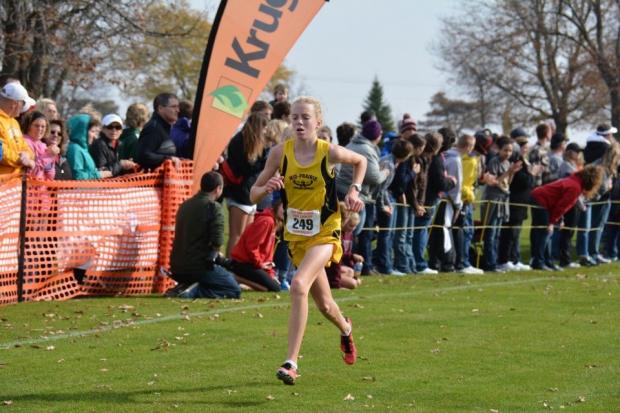 The Mid-Prairie girls team snagged their first State title ever on Saturday October 28th at the Iowa State Cross Country Championships led by sister duo Marie Hostetler and Anna Hostetler, who, for the second year in a row finished in first and second place, respectively. At last year's State meet, Anna was the one who took the win, but after a battle with Hashimoto Thyroiditis, an autoimmune disorder that led to chronic inflammation of the thyroid and produced bouts of fatigue, Anna started to see a decline in her running ability. But while Anna struggled to keep on her feet, Marie stepped up and made up for her sister's struggles. During last year's cross country season, Marie finished second to Anna at 10-straight races as a freshman, but this year the results looked quite different. Marie was the individual champion of the 2A race with the fastest time of the day amongst all of the races, finishing in an impressive 17:51, one of the fastest 5k times ever recorded at the Iowa State meet. Her win, along with Anna's runner-up finish helped the Mid-Prairie team take the win after a runner-up finish last year. Their scoring was rounded out by freshman Ana Fleming in 10th (19;43), junior Moriah Brase in 37th (20:50), and junior Kate Cavanaugh in 38th (20:51). They finished with a team score of 65 points to edge out Monticello who finished with 72 points. While Mid-Prairie will graduate Anna in the spring, this young team could certainly be back next year to fight for another title.