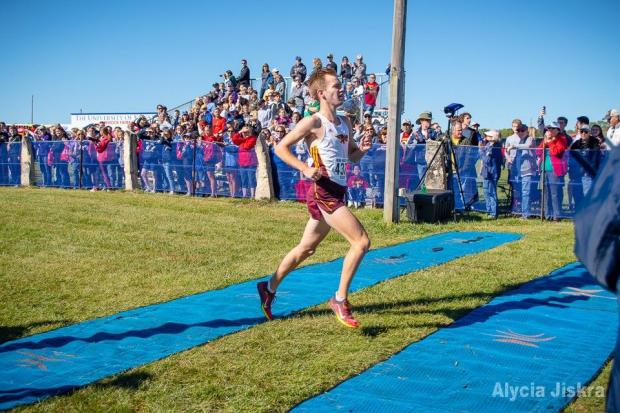 Tim Sindt's incredible, undefeated cross country season continues. The Rim Rock Classic on 9/22 presented beautiful weather for a fast race, but a course that certainly isn't for the faint of heart. With 2 very large, steep hills and other rolling hills dispersed in between, the scenic, iconic course rarely gives athlete's their overall PR's for the cross country season. Though the course definitely isn't a slow course with the impeccable grooming kept up by the University of Kansas, including short grass and wood chips over wet areas, the course is anything but easy. Tim Sindt went into the Rim Rock Classic as a favorite to win, but few realized that he would win by such a huge margin- and make it look so easy. Sindt powered up each hill as if he were unfazed, slowly pulling away from the Varsity Gold field. The Ankeny senior crossed the line in 15:10.70, a new high school course record by 2/10th's of a second set by Colorado State's Paul Roberts in 2016 as a senior from Lyon's High School in CO. He won by seven seconds over Dylan Schubert of Thompson Valley High School in Colorado.

The 15:10 clocked by Sindt ranks him 15th All-Time in the state of Iowa - with a whole lot of racing left this season. The fastest XC 5K time ever recorded by a male in the state of Iowa is 15:02.00 by Ben Anderson of Valley High School in 2013. Could Sindt break that record and be the first athlete in Iowa to break the 15:00 barrier? I think so! For those that have watched Sindt race, he has spent every race looking comfortable and cruising to the finish- and Rim Rock was no different. He has the potential on a fast, easy course like Fort Dodge in another month to dip under that 15:00 mark and of course repeat as State Champion. He could become the greatest male cross country from Iowa of all time....

What do you think?

Watch the race from Rim Rock below!