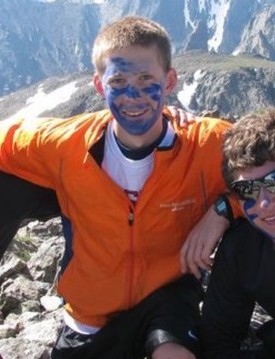 I got started in track and field in 5th grade through Dowling’s grade school program.  I was terribly slow, couldn’t jump or throw very far; so naturally they put me in the 1500m run.

2.      Person/people most influential to your success in track & field?

Coach Tim Ives has definitely been the most influential person to my success in running.  He has a great training program, and knows just how hard and when to push us.  Also Coach Nick Vilotti and past coach Loran Storts have been great influences on my running success.

The key to my success is the training atmosphere I have had over the past four years.  We have so many guys that have put themselves completely into the program.  They are great to train with because they make it easier to put in the work day in and day out.

Obviously I like to race some of my teammates such as Jason Thomas, Spencer Clark and Brian Wahlig.  But I also enjoy racing Ben Anderson throughout the season, and then other guys that we don’t see as much such as Caleb Drake and Mitch Pritts, just to name a few.

I would have to say the State 3200m run my JR year, because it was my first time qualifying for the State meet.  I did much better than I originally anticipated.

11. If a senior, college/university you will attend, or schools you are considering?

I will be attending Iowa State University.

My goals in the long run are just to be a successful member of the Iowa State track and cross country teams, and be able to help them have a successful future.