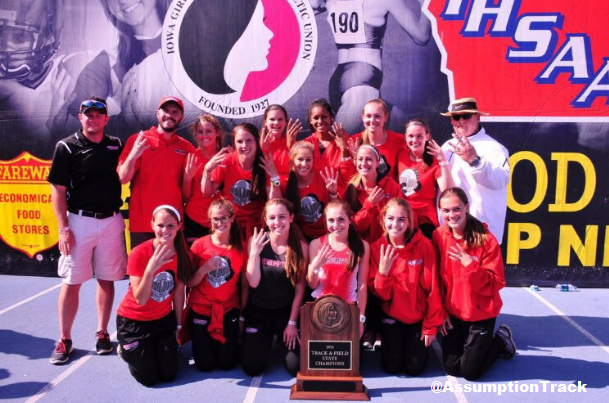 "The young women that have moved on from our program have set an incredible standard for the ones currently in the program. The bar keeps getting raised and newcomers to the program find out right away that every race in this program is earned.  A lot of these kids have made a lot of sacrifices in their personal lives to be where they are," said O'Neill.

The strong middle-distance team this year made headlines at New Balance Nationals Indoor in New York this winter after placing third in the 4x400 and taking the win in the 1600 Spring Medley with a time of 3:59.31. The team was made up of senior Jasmine Harris and Junior Mary Grace Carroll running the 200M legs in a combined time of 52.17, followed by sophomore Carly King with a 57.25 400M leg, and wrapped up by senior Joy Ripslinger who closed in a 2:09.89 800M. The team won the event by over a second and were named All-Americans for the effort. King, Harris, and Ripslinger were joined by sophomore Lea Nelson in the 4x400M Relay and finished with a time of 3:55.65, missing first by 0.03 of a second. Ripslinger also ran in the 800M Run with a time of 2:09.61 to take fourth overall. O'Neill said they had "three main objectives at New Balance: win the Emerging Elite 4x400, we came within 0.03 of that; give ourselves an opportunity to win the Championship 1600M Medley- mission accomplished! And Give Joy the opportunity to be an All-American individually in the Championship 800M, and she did that." After NBNI, O'Neill felt that they "ran pretty well and were able to overcome some adversity even though we didn't execute our best races. I am very proud of what we have been able to accomplish and we are always looking for ways to improve."

The Girls SMR dips under 4mins! Davenport, IA takes home the win with a strong anchor leg over 800m, winning in 3:59.31 pic.twitter.com/aCnRrpHPav

As a 3A school, the Assumption Girls Track team has been ranked first in the Heartland Soles pre-season and current team rankings, to which O'Neill said "we know we have a target on our backs and it comes with great responsibility. It helps our coaching staff keep our edge and I know it helps the girls stay focused." The coaches focus on speed and efficiency with their athletes, adding in strength training to get more power and endurance later in the season, with a focus on movement training, running mechanics, and body position. O'Neill himself is an Assumption graduate from the class of 1996. He went on to throw Shot Put and play football for the UNI Panthers, followed by years of being a strength and conditioning coach in the Bay Area of San Francisco. He moved back to Davenport initially to be a strength and conditioning coach in the quad cities, but ended up interviewing for the Head Boys Track & Field coaching position and was hired on the spot. The following year, he combined the boys' and girls' programs and they have remained that way since.

As they head into the busy racing season, O'Neill said that they are not setting big goals, but rather working "on each individual doing the little things that they can control to put themselves in the best situations possible. Training, sleep, nutrition, being good citizens; if they take care of those things, we will be in a position to do some pretty great things."

O'Neill was also generous in sharing what a typical week of training right now looks like for athletes like those who competed at New Balance Nationals Indoor, which you can check out below!