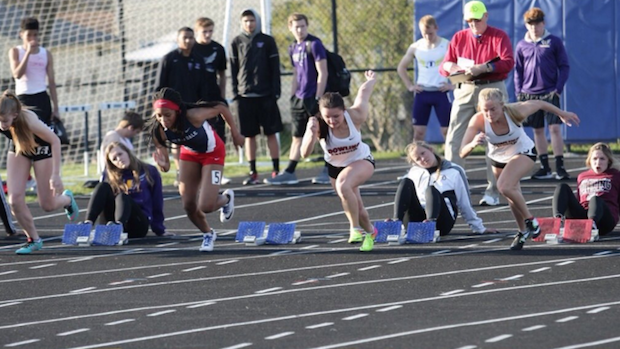 It was perfect weather for a track meet at Frerichs Field in Urbandale, with a strong lineup of teams that included Urbandale, Dowling, Indianola, Ottumwa, as well as Des Moines Roosevelt, Des Moines East, and Mason City on the girls' side with Waukee, Ankeny, and Johnston represented on the boys' side.

The girls' varsity races included some great performances, such as Indianola standout Anna Hoyman sweeping the throwing events. In the shotput, the senior threw 39-04.00 to take first, and threw 144-11 in the discus, beating fellow Indian Ellie Jensen by a large margin. Her discuss throw will improve her number 1 ranking in the state of Iowa by a huge margin. Juru Okwaramoi of Dowling ran a great 200M dash with a time of 26.20, winning by over half a second. She was followed by Hope Johnson and Dee Dee Pryor of Urbandale. Bailey Mottet of Urbandale dipped under the 16-second mark in the 100M Hurdles with a time of 15.97 which puts her in the top 10 performances of the past week in the event. In the 1500, Urbandale's Avery Peterson ran a blazing 4:54.04, which gives her the top time so far this week and places her fourth overall in the state so far this season. Maria Horn impressed in the 100M and 200M Wheelchair races, with times of 33.96 and 1:10.39. Both were PR's for her and give her the top times in the state for both events. Skyler Shellmyer of Urbandale won the 400M Hurdles by a margin of 4.4 seconds with a time of 1:06.70, which helped the J-Hawks take the team title and puts her in the top 5 in the state. Urbandale won with a score of 124, barely edging out Dowling by one point. Behind those two landed Indianola in third with 85 points.

During the boys' races, Waukee had a strong showing at Frerichs Field. In the 200M Dash, Waukee's Dan Blocker clocked a 22.36 which places him 2nd in the state. Tavien Gardner won the 100M Dash with a 10.91 which ties him for the 4th fastest time in the state of Iowa so far this season.  Waukee's Josh Andrews has had a great year of running, including an appearance at the Iowa State High School Cross Country Championships in the fall. Prior to last night's race, Andrews held the fastest 400M time in the state of Iowa with a 49.60, which he improved on last night by running 49.26. That will give him a large margin on the next athlete as we approach the Jim Duncan Relays this upcoming weekend. Andrews then came back to run a solid 800M winning time of 1:58.11. Two other athletes dipped under the 2:00 mark - Patrick Bose of Johnston with a 1:58.87 and fellow Waukee Warrior Carson Doty in 1:59.61. Andrews is also ranked 1st in the state of Iowa for the 800M with a time of 1:57.72, which he ran at the Waukee Boys' Relays on 3/23. Urbandale's Ross Secaur won the Discus ahead of J-Hawk teammate Isaac Erbes with a throw of 166-04, which will put him in the top 5 for the state. The 1600 was a great heat of excellent performances to take some of the top times in the state. Jay Mixdorf of Ankeny was the winner in 4:26.69, which is the top time so far this season in Iowa. Behind Mixdorf was Dalton Bowers of Ottumwa in 4:27.04 and Jackson Lewis of Waukee in 4:28.81, respectively. Bowers' time will place him second in the state behind Mixdorf, with Lewis moving down to fourth with his season best improvement of .09. Lewis also won the 3200M at Frerichs Field with a margin of 4.5 seconds by running 9:53, which will rank him 7th in the event in Iowa. With such strong performances across the board, Waukee easily took the win with a point total of 196, beating Johnston by 93 points with Urbandale close behind with 99.50.

Check out the full results from the Gary DouBrava Invitational here!