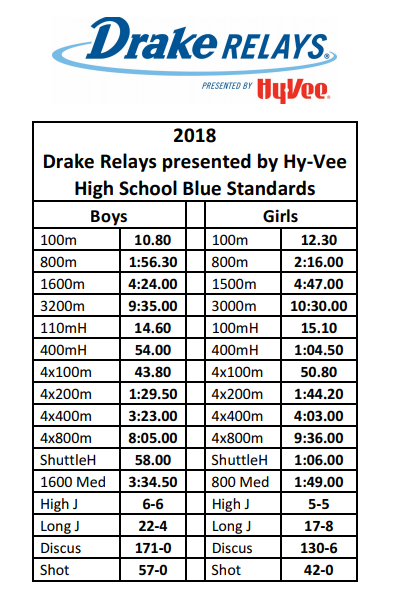 The Drake Relays will be here before we know it. Above is this year's guide to the qualifying standards for high school athletes in Iowa.

As I went through and used our Rankings Generator to pull rankings for each event, I noticed something interesting. With just returners listed, very few males ran at or under this year's qualifying standards last year. However, the females seem to have larger amounts of athletes who achieved the standard last year.

For instance, the Boys 100 M standard is 10.80. Only 3 individuals are returning with PRs from last year that would qualify this year...

Similarly, the girls 1500 houses 11 returners that ran the qualifying time or under last year, but the boys 1600 only has 5.

In the jumps we see a similar discrepancy with females having far more achievable marks versus males.

The throws are the one exception so far to this rule. In both the Discus and Shotput, very few athletes will be returning with PRs that would qualify them to this year's Drake Relays...

Though this is just a starting point and is not the official standard for who can and will qualify, it is certainly an interesting find to begin with!  As of right now, it looks like more females could potentially nab the automatic qualifiers than males.

For more information about qualifying, you can check out the official rules here!