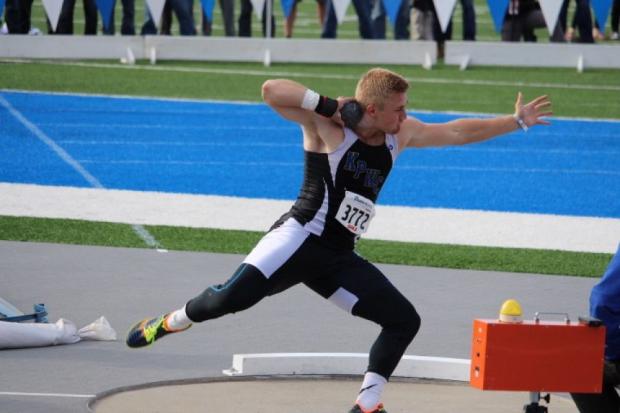 Nick Phelps will go down as one of the greatest Iowan throwers of all time, a tradition that Phelps' family knows all too well. Nick's father, Scott Phelps, wasn't the tradition starter, but has helped encourage his children to reach for the stars. Colton, Kiana, and Nick have all become exceptional athletes, particularly in the throwing events much like their bloodline. Continue on to hear how Scott has continued the Phelps family traditions and how he felt about Nick's commitment to compete as an NCAA Division I Kicker/Punter.

Track and field runs deep in the Phelps family blood, including you as the patriarch. Can you explain how that all started?
My father's Grandpa Wylie was a stand out prep shot putter in the early 1900's.  Dad(Robert Phelps Sr.) was a nationally ranked college javelin  thrower for Grinnell College(Drake medalist).  His brother George was track guy as well.  Won multiple state championships (hurdles) and was First Round Draft pick for Denver in 1960 as fullback.  My brother Robert Phelps Jr. was Iowa Conference Discus champion in college(Luther). In 1986 I set the Iowa all class state meet record in the discus.  Today it is the only All Class State meet record our family does not possess(throws)(Kiana owns girls Shot Put and Discus and Nick set the Boys shot put) (On Iowa all time charts Kiana is #1 Discus, #2 Shot, Nick #2 Shot, #5 discus).  Brother Colton was Northern Iowa throws crew member specializing in Hammer.


How has it evolved over the years?
Dad always had passion for throws.  He bought me a orange 4K shot in 6th grade.  I would throw in back yard and mark farthest with stick.  Was always fascinated with what I needed to do to move stick our further (training, diet, technique etc.)

Kiana and Nick are both very high caliber throwers Nationally and Internationally. What was their upbringing like in athletics to foster that kind of competitive spirit?
When the kids were old enough Laura and I  had them all in Jr. Olympics(AAU & USATF) They were all 2 years apart so we could have them all in the same meet/location.  Hard to do that in other sports.  I think we put a lot of emphasis in track because we had a background in it and there are no politics.  It is what it is.  I always told the kids to do the best that they could and that is good enough.  I also told them when they get to be my age it is nice to have peace of mind that you did everything that you could to reach your goals.  No regrets.

Nick's older brother Colton also competed in the throwing events and went on to compete in college. Has that helped motivate Nick or has their been some sibling rivalry? Maybe both?
Colton is a people person.  He did at UNI what I hoped all my kids would do.  Be on a team to learn the training system that will be in grained in you for a life of fitness(I still do Iowa State workout routine to this day).  And most importantly to develop lifelong friendships.  Colt's calm presence and knowledge has been instrumental in Nick's success.  I still remember in 8th grade Nick had official marks of 64'3" Shot (4k) and 194' discus. (He only had one meet with right cross)  The judge said he was toe fouling.  We asked to mark last throw anyway to see what would have been.  It was 209'3".  Colton was more excited about that than Nick.  That is the type of older brother that you want.

How have you encouraged your children in their athletics?
Again I always stressed that you want to give your all so when you get older you are satisfied enough with your effort you will be ready to focus on more important things such as your family and career.

What did Nick's training look like the past four years?
Nick's training consists of high volume competition like throwing(mostly shot indoors when weather bad and discus outside when nice). (heavy implements off season and progressively lighter as season progresses). Sprints/Plyometrics.  For a small school Kingsley-Pierson very fortunate to have very knowledgeable Mentor/Strength coach in BJ Mulder. BJ puts a lot of emphasis on athleticism and explosion in his weight training.  We take his workout and add thrower specific lifts such as Power Clean/Snatches etc...It seems to be the right mix.  BJ's work with the school kids is always beyond call of duty.

What extra things (i.e. weights, nutrition, etc) has Nick done to make him one of the greatest throwers in Iowa history?
As with his lifting Nick's diet is meticulous.  He documents and charts everything.  In season his diet is high protein quality food.  Protein powder/fruit/veggies.  He buys his own raw chicken breasts/fish.  Grills/ bakes and pre-makes his meals(all the kids do this).  I think they get from mom as I am more of McDonald's guy and could make some improvements.

Nick plans to pursue other athletic endeavors in college than throwing. How did you as a family help him make that decision?
Nick with input from family etc. has decided that even though Track & Field/Baseball are passions of his  he wants to be part of a Division I Kicking/Punting crew.  If the track program is willing to accept him to throw he would like to possibly do that as well.

Kiana has had a very successful collegiate career so far at the University of Oregon. What has that been like for your family?
Kiana being a member of Oregon's Track team(first DI school to win triple Crown) has been a dream come true for her and our Family.  The whole Eugene scene is as advertised.  Our family loves the history and support they show.  You overhear the locals on meet day asking each other WHEN they are going to the meet not IF they are going(Tracktown USA).   Kiana had major surgery after returning from World Jr's (Poland).  That has been a big set back.  Her mind set is good.  We all think over the next few years she is going to reach her goals and finish strong.
What hopes do you have for his athletic career, both collegiately and post-collegiate?

Nick has the athletic ability and work ethic(2-3 workouts/day) to reach highest level.  We are hoping he finds his niche and can feel that he is adding  team value.  Ultimately, we want him develop life long quality relationships while having the peace of mind that he has given 100% as he always has.  This will eventually allow him to focus on his family and career which is most important.

Nick ended his high school career with another throws sweep, winning both the Shot Put and the Discus, a total of 5 State Titles to his name. He will end with PR's of 196-2.5 in the Discus and 67-2 in the Shot Put. Those numbers rank 5th Iowa All-Time in the Discus and 2nd Iowa All-Time in the Shotput. His Shot Put throw was achieved at the 2018 State meet and was the farthest throw in the 109 year history of the event. The Phelps family has a beautiful history of athletic excellence, and we look forward to seeing what Nick will achieve during his collegiate career and beyond, whether or not that involves throwing.