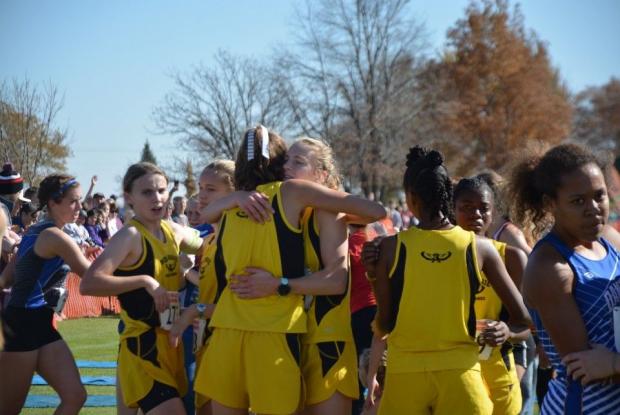 The 2018 Iowa State High School Cross Country Championships began as a crisp, foggy morning. Teams studied the course turn by turn and prepared for their biggest race of the season. To start the races, the 4A Girls were the first to toe the line. View photos from all of the races HERE.

From the gun, Ashlyn Keeney of Iowa City Liberty took the lead, pushing hard up front and pulling away from the field. Linn-Mar's Micah Poellet never let Keeney get too far out of reach, eventually overtaking her with about 1000 meters to go. Poellet solidified her lead winning by 25 seconds with an 18:03. Behind Poellet was a pack that changed throughout the race, with Waukee's Peyton Kelderman leading it through the first half of the race. Keeney and Kelderman both unfortunately had the same result and ended up finishing quite a ways back in the field. Southeast Polk's Mattison Plummer and Johnston's Brooklyn McKee ran tactically at the back of the second pack, chasing people down, and finished 2nd and 3rd in 18:28 and 18:43. It was a tight race for the team title, with Southeast Polk bringing home the win by just one point over the reigning champions from Johnston with 78 and 79 points. Valley made the push for the podium and finished third with 97 points.

Watch highlights from the 4A Girls Race HERE

In the 4A Boys race, the favorite to win and reigning champion Tim Sindt started to pull away from the field at about the mile mark. From the gun, Iowa City West's Kolby Greiner took the lead and pushed the pace through the first mile until Sindt took the lead. Some wondered if Sindt would go after the record and be the first to break the 15 minute mark at the State meet, but due to a hip injury Sindt kept the race closer than expected, still bringing home the individual win and leading his team to a top five finish. Greiner finished in 3rd in 15:44 with Jack Pedergast from Prairie finishing 2nd in 15:41. Dowling's Sam Hall lead the Maroons to yet another State title, another close finish to win by one point over Dubuque Hempstead with 72 and 73 points. Cedar Rapids Washington was the surprise 3rd place finisher with a team score of 95.

Watch highlights from the 4A Boys race HERE

The 3A Girls race was an exciting one for fans as Janette Schraft chased down Adrianna Katcher. Schraft moved from 1A to 3A this year and was looking to get a win during her senior season after two frustrating finishes the past two years. Schraft overtook Katcher right around the 2 mile mark and pulled away, finishing in 18:22 to Katcher's 18:30. Star freshman Ainsley Erzen was the only 9th grader to crack the top 15 finishing in 4th with a time of 18:57. Dubuque Wahlert were the team champions with a great score of 56 points ahead of DCG's 85 points. Glenwood was the third podium finisher edging out Ballard with 171 points versus 173 points.

Watch highlights of the 3A Girls race HERE

The 3A Boys race was bittersweet for the Mt. Pleasant champion, Cody Mertens as the last cross country race of his career, as he has decided not to pursue collegiate athletics. Mertens pulled away from Quinton Orr of Humboldt, finishing in 16:02 and 16:10, with Nate Mueller just behind for 3rd in 16:12. Gilbert was the team favorite coming in and finished with athletes in 5th, 6th, 19th, 21st, and 37th overall (2+3+14+16+29 team points) for a team score of 64 over Clear Creek-Amana in 80 points. The third spot was anyone's game, but Marion had a great day at nabbed the final podium spot with 102 points over Carlisle's 128.

Watch highlights from the 3A Boys race HERE

The 2A Girls race was a battle of State Champions with reigning 2A Champ Marie Hostetler racing against last year's 1A Champion Emily Staal. The two ran neck and neck for much of the race, each taking a step in front of the other to challenge for first throughout. Coming around to the final turn, Marie made a push for the win and sprinted down the final stretch to finish in 18:02 over Staal's 18:07. The pair finished over 50 seconds ahead of the next athlete. Hostetler's time was the fastest girls' time of the day by just one second over 4A Champion Micah Poellet. Hostetler lead her team from Mid-Prairie to another team title with 89 points over Williamsburg's 118. Woodbury Central got the final podium spot with 131 points.

Watch highlights from the 2A Girls Race HERE

For the 2A Boys, Reece Smith ran away with the title finishing in 16:00, a full 22 seconds over the second place finisher, Joe Anderson of George-Little Rock. The top three finishers were all seniors, rounded out by Jerry Jorgenson of Treynor. Smith led a strong charge to pull away from the field just after the mile mark, never looking back. Tipton brought home a solid team win with 72 points over Bellevue's 100 points lead by Caleb Shumaker who finished 4th overall. Bellevue edged out Sioux Center by just two points for the 2nd spot, while George-Little Rock was fourth behind Sioux Center with 102 and 108 points, respectively.

Emma Lucas was the 1A Girls Champion without a doubt, winning the race in 18:41 over Peyton Pogge in 19:24. Lucas took the lead from early on and steadily pulled away from the rest of the field, finishing with a huge gap. Sisters Taylor and Courtney Sporrer of Logan-Magnolia finished 3rd and 4th in 19:34 and 19:36, leading their team to the Title with 66 points. Regina finished in 2nd with 128 points, but the tight race was for the third and final podium spot between Hudson and Kee who finished just 3 points away from each other. Hudson got the third spot with 142 points over Kee's 145.

In the 1A Boys race, Sean McDermott lead the Madrid team to a win, bringing home the individual title in 16:16, just three seconds over Joshua Baudler of Nodaway Valley. The pair ran close together for much of the race, pulling away from the chase pack. Will Roder got the 3rd place finish in 16:32. McDermott pulled away from Baulder after the final turn, sprinting into the finish and nearly collapsing past the line. With McDermott's one point, the Madrid team won the title with just 63 points over Calamus-Wheatland's 111 points. It was once again a tight battle for the final podium spot with South Hamilton scoring 121 over Sibley-Ocheyedan's 124 for the third place finish.

watch highlights from the 1A Boys race HERE