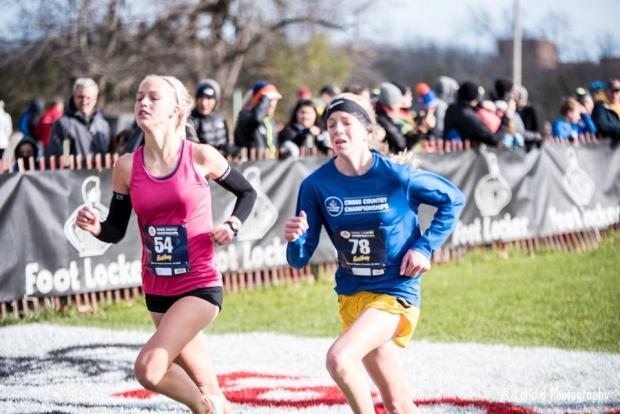 The Foot Locker Midwest Regional Championship race took place this weekend at Wayne E. Dannehl Cross Country Course in Kenosha, Wisconsin. Spencer Smith was the top finisher from the state of Iowa on the boys side. He finished in 59th place overall clocking a time of 16:04. Cole Schroeder was the next finisher for the Hawkeye State in 70th place with a time of 16:09. This was Schroeder's second championship race after having to sit out at the Iowa State Cross Country Championships as part of the Dowling Catholic Maroons team due to transfer rules. Fellow Maroon and 4A runner up Matthew Carmody was the third representative to finish from Iowa in the Boys Seeded Race. Other Iowans who competed include Konnor Sommer, Ian Kaffenberger, Sam Hall, Parker Huhn, Max Locher, Andrew Wright and Kole Sommer. Kole Sommer was the 3rd fastest freshman finisher in the seeded race at the Footlocker Midwest region, finishing in 18:27 in 214th place. On the team side, the state of Iowa finished 9th out of 9 states.
On the girls side Marie Hostetler finished in 22nd place with a time of 18:14, with older sister, and University of Iowa commit Anna close behind with a time 0f 18:22. Her performance was good for 31st overall. The women finished in 8th place out of 10 states represented.